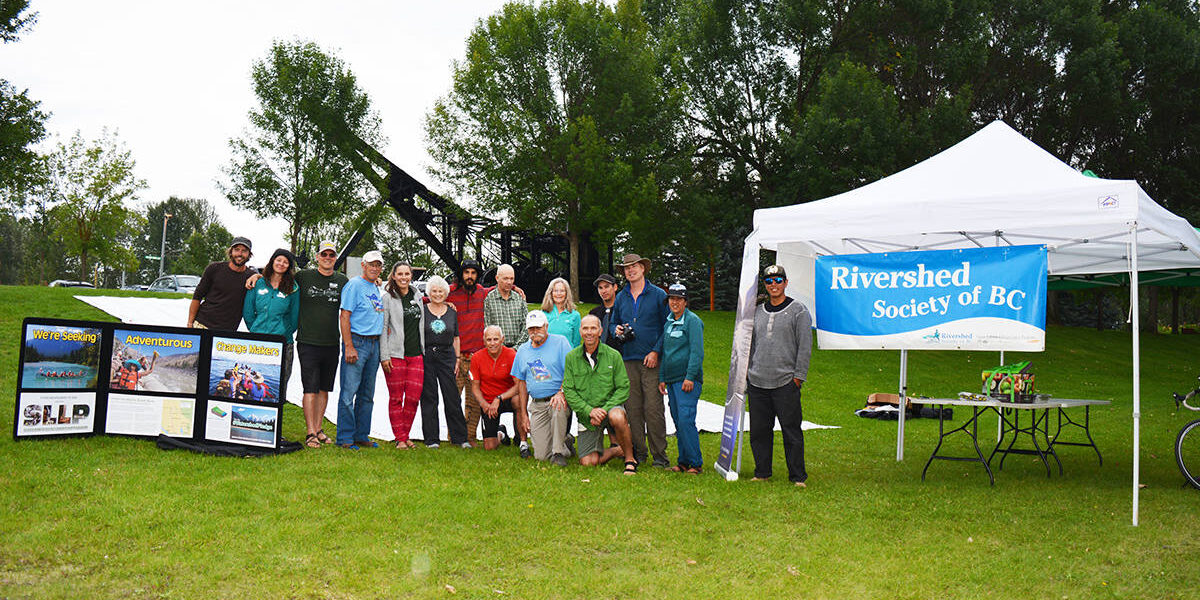 Before enjoying a FraserFest dinner catered by Bliss, members of the Rivershed Society of B.C. Sustainable Living Leadership Program pose for a photo with local community members who greeted them as they paddled into Ceal Tingley Park Tuesday, July 30. Lindsay Chung photo

The Fraser River is a busy watershed, and last Tuesday, the confluence of the Fraser and Quesnel rivers was particularly busy, as a group of local community members welcomed a voyageur canoe paddled by members of the Sustainable Living Leadership Program.

The Sustainable Living Leadership Program (SLLP), sponsored by the Rivershed Society of B.C., is a program in which participants travel the length of the Fraser River route by voyageur canoe, river raft, on foot and by vehicle. This year’s 29-day journey began July 19 at Mount Robson and will finish Aug. 16 in Vancouver.

This year’s SLLP participants paddled their voyageur canoe from the Stone Creek RV Park and Campsite north of Quesnel to Quesnel July 29 and 30, camping at a wilderness campsite at the mouth of the Blackwater River on July 29 and arriving at Ceal Tingley Park where the Fraser and Quesnel rivers meet July 30, just before 5:30 p.m. The paddlers were met by a handful of community members and by Brian Paul from the Lhtako Dené First Nation, who welcomed them to Lhtako territory. After packing up their gear and getting their canoe on their trailer, SLLP participants joined community members for a FraserFEST community dinner catered by Bliss.

Following the dinner, the SLLP participants travelled by van to Xat’sull Heritage Village at Soda Creek. From there, they were going to raft to Yale, take part in community dinners in Williams Lake, Lillooet, Tuckkwiowhum and Yale and raft Hell’s Gate and the Thompson River between July 31 and Aug. 11. The final stretch of the trip is paddling from Hope to Vancouver, finishing with a celebration dinner and graduation ceremony at the Jericho Sailing Centre in Vancouver on Aug. 16.

By the end of the program, participants will have travelled 1,400 kilometres down the Fraser River by canoe, raft, shuttle van and on foot.

During the day, they learn about stewardship and designing their own sustainability project for their community, then they camp under the stars along the banks of the river.

“It’s all trying to raise awareness of the Fraser and threats to salmon and possible solutions,” said Fin Donnelly, chair and founder of the Rivershed Society of B.C. and MP for Port Moody-Coquitlam. Donnelly twice saw the 1,400-kilometre length of the Fraser River between 1990 and 2000, and he made 12 other environmental marathon swims to draw attention to the health of B.C.’s rivers, lakes and oceans.

Travelling through 10 of B.C.’s 14 biogeoclimatic zones, SLLP participants study watersheds, salmon, resource management and how to lower their ecological footprint and discover what it means to live sustainably and about what Donnelly described as watershed CPR — conservation, protection and restoration.

Each program participant is working on a community action project, and as they introduced themselves before the community dinner, they spoke about their projects, which include educating the youth about how to protect the Chilcotin riverside, starting a Fraser watershed photography contest, creating a salmon enhancement channel, white sturgeon conservation, and working to integrate the environment into teaching.

The paddlers arrived in Quesnel on Day 12 of their 29-day program.

Up until their arrival in Quesnel, the SLLP participants had paddled three days from Tête Jaune Cache to Crescent Spur, hiked the Goat River Trail and paddled two days from Stoner just south of Prince George to Quesnel.

Jeffrey Gibbs of Vancouver is taking part in SLLP for the first time.

“I heard about this project for quite a few years and wanted to experience the entire Fraser River because I want to be involved in protecting the river,” he said. “I thought if I experience the river through all its ecosystems, I would be a better advocate for the river.”

So far, Gibbs has enjoyed the experience and gotten a lot out of it.

“It’s been a very rich experience so far,” he said. “We’ve travelled through the Rocky Mountains and the Cariboo Mountains and met local people in various communities from Dunster to here, and we’re really getting a sense of how busy the Fraser watershed is. We’re learning about the importance of the salmon and how the river is being threatened by human activity.

“The experience of being on the boat, you start to feel like you are part of the river. It really is an amazing river, and to be sharing the experience with the team, there are about a dozen of us, and we are all working together and cooking together and sharing our thoughts — it makes for an unforgettable experience.”

For his community project, Gibbs is working on creating a Fraser watershed photography contest.

“It would involve people who live throughout the watershed taking photos where they live,” he said. “It will be done over a year so there will be the seasons, and the idea is to document a year in the life of the Fraser watershed.”

Gibbs said he already had the idea when he applied for the program, but throughout the program, they have had workshops where they discuss their ideas in more detail, and people’s projects are evolving as they go.

Oliver Berger of Williams Lake was an SLLP participant in 2016, and he came back this year as a facilitator. The program had a big impact on his life.

“For sure, it was super amazing to get in touch with nature for a month,” he said. “When you’re on the river for 29 days, your lifestyle habits change. It changes the way you live.”

Berger says the experience also gave him a whole new appreciation for the place he lives.

“It’s an amazing watershed we live on, and we should put more effort into protecting it,” he said.

When Berger participated in the program in 2016, the facilitator was leaving, so they offered him a chance to help out. He missed out in 2017 because of the wildfires, but he facilitated his first program in 2018. He says last year and this year, he has noticed the participants learn a lot.

“I think you learn a lot of things,” he said. “Just being out in nature grounds you if you are in a busy city life and lets you refocus on what you want to do. They each have a community project, and this lets them refine their projects and refine their leadership skills.”