Originally published on page 17 in the December 2019 College Matters newsletter from the College of Applied Biology. Download the full newsletter (pdf) here. 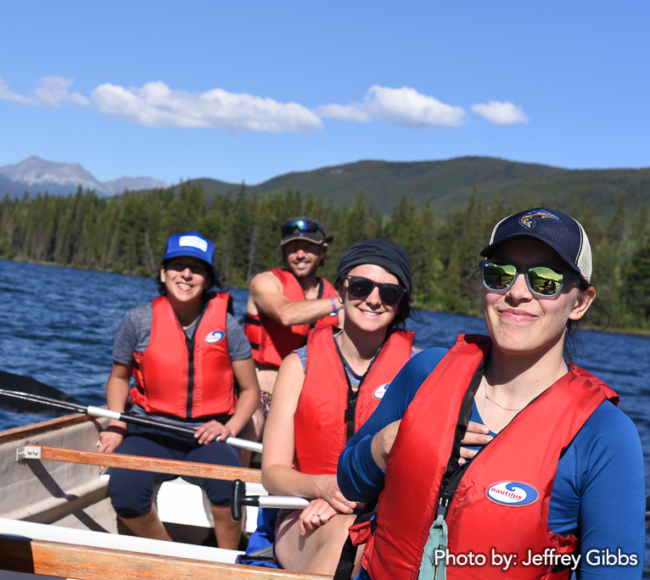 Corrie (front) and 3 of the other 7 participants on the 2019 Sustainable Living Leadership Program.

To say that 29 days canoeing and rafting down the Fraser River was intimidating, would be an understatement. Yet, after armouring myself with the extended weather forecast (mostly rain of course), I found myself standing at the start of a 1,400 km journey, at the headwaters of the Fraser River. Decidedly, it was time to become acquainted with one of Canada’s last remaining natural salmon runs.

Hosted by the Rivershed Society of British Columbia, the Sustainable Living Leadership Program (SLLP) is an annual event with the goal of inspiring a passion for the Fraser River and community stewardship, while emphasizing the importance of healthy watersheds. Instead of a traditional classroom-style program, participants are immersed in the history, culture, and ecology of the river over a month-long journey from its headwaters to sea. This year, I was one of seven participants from disparate backgrounds who was invited to participate in the 2019 SLLP trip (https://rivershed.com/connect/sllp/).

Fueled by root vegetables and oatmeal, we made our way east from Mount Robson through the Rocky Mountain Trench to Prince George, south down the Fraser Canyon to Hope, and through the meandering reaches of the Lower Fraser before finally reaching the Salish Sea. Crossing ten unique biogeoclimatic zones, we were rewarded with exceptional views, rare flora and fauna, and a perspective of the river that not many have experienced.

This year was a particularly interesting year to be on the river. A recent landslide near Big Bar created a five-metre vertical cascade, obstructing salmon on their northward migration. Although we had to portage around the slide, we had the opportunity to meet the many Indigenous communities, biologists, and people from all levels of government who were working to remove the salmon migration barrier.

But, even before the landslide, Fraser River salmon have been in a state of decline, with some species, such as steelhead, on the brink of total collapse. “There are not enough fish,” was a sentiment echoed by every Indigenous community we met with along the journey. This was perhaps most clear when we travelled through traditional fishing areas, where hundreds of racks stood empty due to the sockeye and chinook salmon closures as a result of the slide.

So, what has this experience meant to me as a Professional Biologist? I found a great deal of inspiration and motivation from my month on the river. The Fraser River watershed is a complex system that connects almost a quarter of this province by water. Even after spending a month on its shores, I’m still enamoured by its size and role in BC’s ecology.

What surprised me most was the relatively intact state of the river. Prior to this experience, my perspective of the Fraser was largely shaped by the lower mainland, where extensive development has drastically altered the estuary. I have learned that this perspective is not representative; there is still considerable opportunity to conserve, protect, and restore this amazing watershed.

Stepping out of my comfort zone (which was, by definition, uncomfortable), embracing a month without showers, and living on the Fraser River was an amazing experience. Now, back at work in the lower mainland, I look forward to my field days on the river, reminded of my time paddling.

Corrie Allen is a Registered Professional Biologist at Keystone Environmental Ltd. in Burnaby, BC. This summer she was one of 7 participants of the 2019 Sustainable Living Leadership Program, hosted by the Rivershed Society of BC.