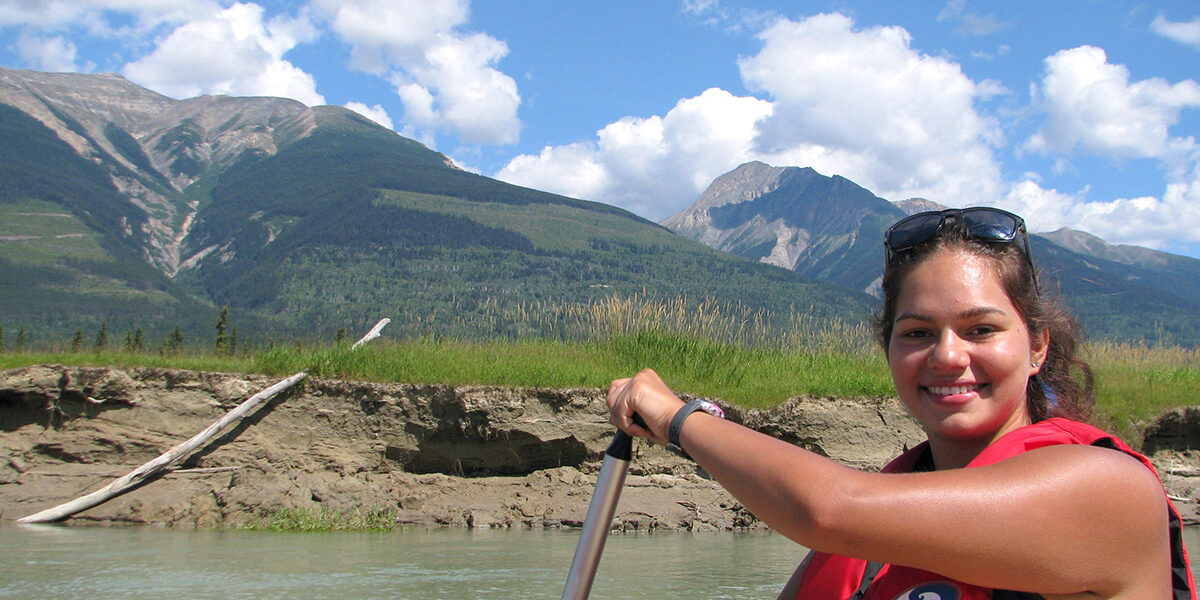 Myka Kollmann grew up in the Bronx, New York and has lived in Vancouver for the past 13 years. She is currently a fourth-year undergrad at UBC studying social justice and environmental studies.

Myka enjoys working in her community and being out in nature. She has been volunteering with a local recovery house in Surrey, supporting people living with addictions. Along with her love of cooking, reading, writing, and quiet reflective time, she is considering a career focused on human rights, environmental law, or teaching. 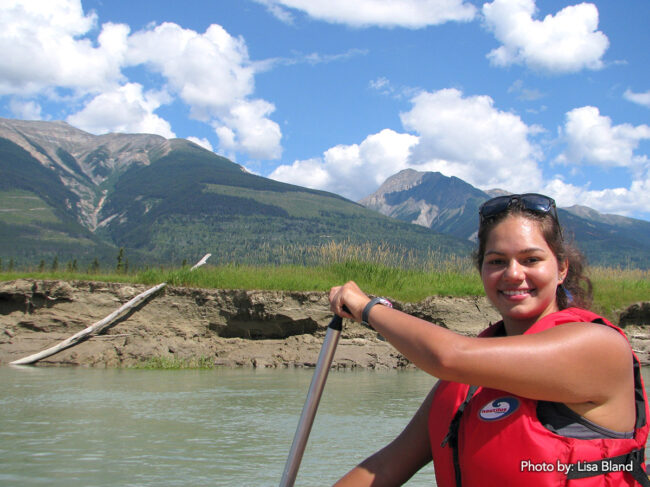 Myka Kollman paddling in the Robson Valley in the upper Fraser River watershed.

Myka heard about the Rivershed Society of BC’s (RSBC) Sustainable Living Leadership Program (SLLP) and thought 27 days in the wilderness sounded amazing. “It’s not an opportunity that you often think of doing or making the time to do on your own, so I thought, why not apply?” she says. “I wanted to push myself into an environment that I had never been in before. I haven’t travelled much within BC or in my watershed, and had only seen the lower end of the Fraser River. I learned that with all the river’s changes we saw on our journey, if you had never seen it before, you wouldn’t think it was the same river.”

Myka also knew a bit about Fin Donnelly, RSBC’s founder and chair, including his 1,400-km swim down the Fraser River in 2000. She knew the SLLP was taking young people down the river and helping to inspire them to become environmental and sustainability leaders, raising awareness about the issues affecting this vitally important watershed. “There aren’t a lot of groups like this doing work on the Fraser River,” says Myka. “I knew RSBC worked in many communities throughout the province, either through the SLLP alumni or through their organization. They have a great network throughout the province and regions of the Fraser River Basin.”

Another interesting thing about Myka is her passion for sturgeon. In 2016, she had the opportunity to participate in a tagging program with the Fraser River Sturgeon Conservation Society. It was out of this fascination that her SLLP project plan developed.

“I had never seen a fish like this and I didn’t know they existed in the Fraser River. One of the fish we tagged was massive at seven feet long and 300 lbs. When you’re up close looking at them, you can see the detail in the sharp spikes along their spine, the shimmery gold colour of their skin, and their long whiskers. They are often called prehistoric giants and look like they belong in the Jurassic,” says Myka.“There are so many amazing things about them—they’ve adapted and survived through ice ages and continue to adapt to impacts caused by humans. They’re one of the most resilient species for adapting to stress and I think we can learn a lot from them. Although I find them fascinating, I would be terrified if I didn’t know about them and I saw one in the river,” she laughs. 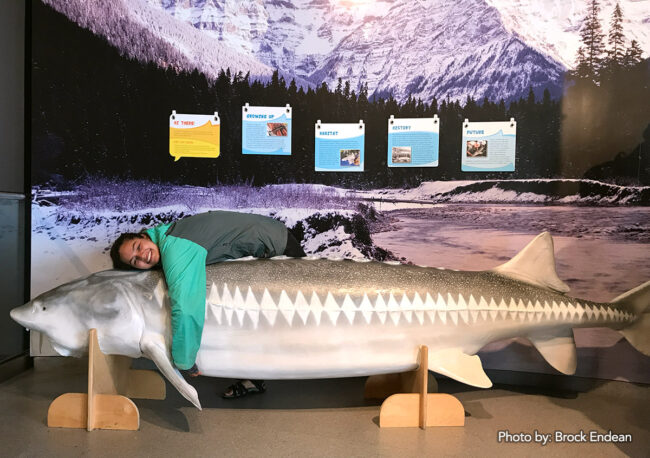 Myka’s SLLP project is to develop an interactive outdoor education summer camp for youth to learn about and encounter white sturgeon in its natural habitat in the Fraser River. “They are under a lot of stress, largely due to human impact and people not understanding how they should be handled,” she says. “My project will center on the importance of sturgeon to the river ecosystem, how to properly handle them, and why we need to protect them. I would like to help create an environment for them where they are safe and can thrive like they have for thousands of years.”

Myka plans to work alongside other communities and organizations such as the Fraser River Sturgeon Conservation Society, Sturgeon Slayers, and First Nations groups. “I want to connect with sturgeon tagging and fishing groups to get a full picture and perspective of what is happening in the province,” she says. 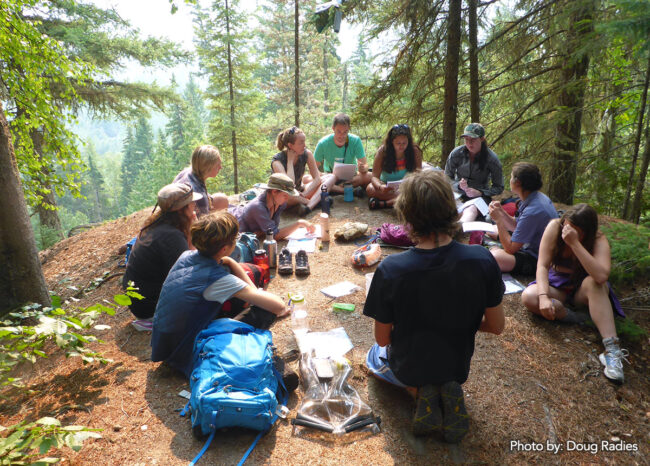 Participants discuss their project plans after a hike in the Fraser headwaters.

Along the SLLP journey, Myka developed and brainstormed her project plan with the other participants, engaging in exercises and activities aimed at helping them become more concrete. “We were given many opportunities to discuss our projects with the group and present them—whether it was in camp or on the rafts,” she explains. “We received feedback from everyone, including Fin and the trip leaders, which was really helpful. It was amazing to have the support and collaboration of a group of intelligent and insightful people with so much knowledge about the environment.”

Myka experienced many highlights. “Something that stood out for me is that it’s not only the salmon, bears, and birds that depend on the river; it’s also all the communities along the way. No matter where you go on the river, many depend on it as a part of their livelihood, culture, jobs, and daily lives. For the Aboriginal people, it has been a central part of their families and communities for generations,” she says. 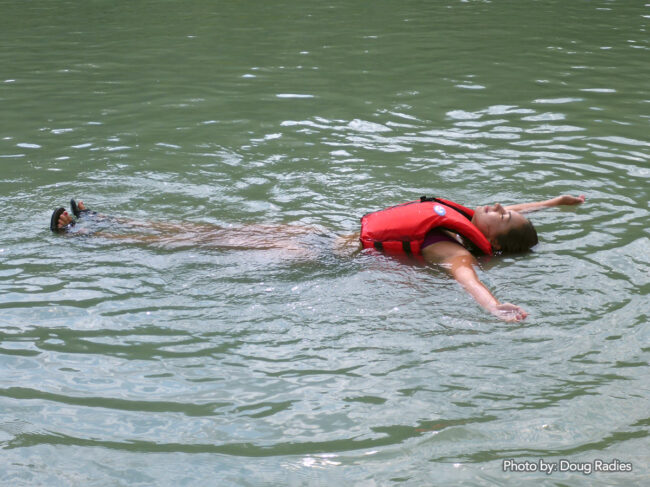 Myka floating in the Fraser River.

“It was amazing to see the river from a small creek in the headwaters trickling down and turning into a big, fast, gushing river carrying everything with it throughout the province,” Myka says. “Just being able to swim or float and to be carried along with it, or submerging your head in the water and hearing the sediment crackling—feeling its power and strength and thinking about all the life it supports was an amazing experience.” 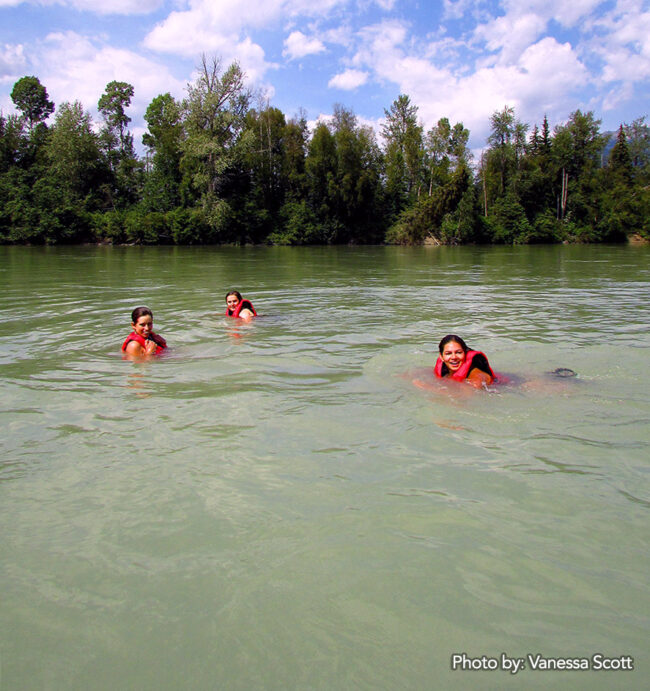 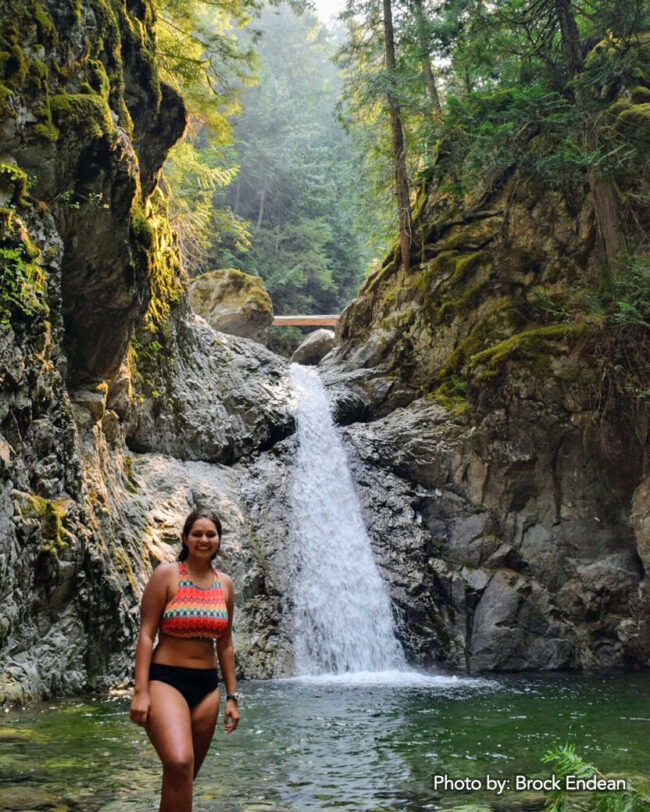 Myka enjoyed getting to know everyone on the trip and developing connections and friendships that will last beyond the trip. “It’s definitely a challenge to be out there for 27 days in the wilderness but doing it with other people makes the process easier. You learn so much about yourself by living with people you’ve never met before, for a month,” she explains. 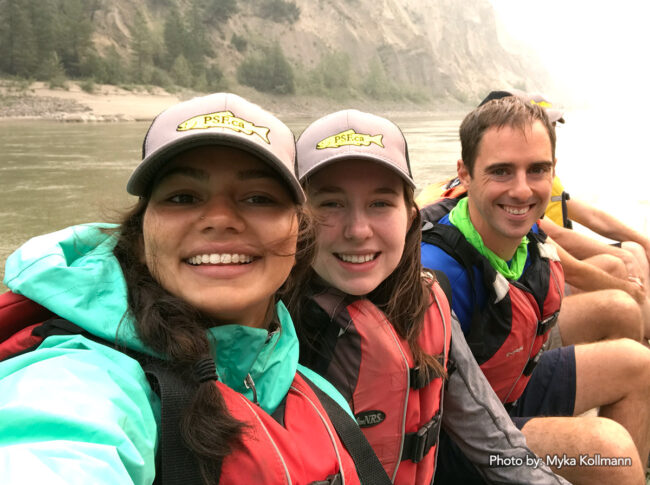 Going through the rapids was also a highlight and Myka laughs thinking back to how many times she screamed out loud while encountering the rapids near Hell’s Gate. “I was a little scared but also excited and exhilarated by the adrenaline rush of this e 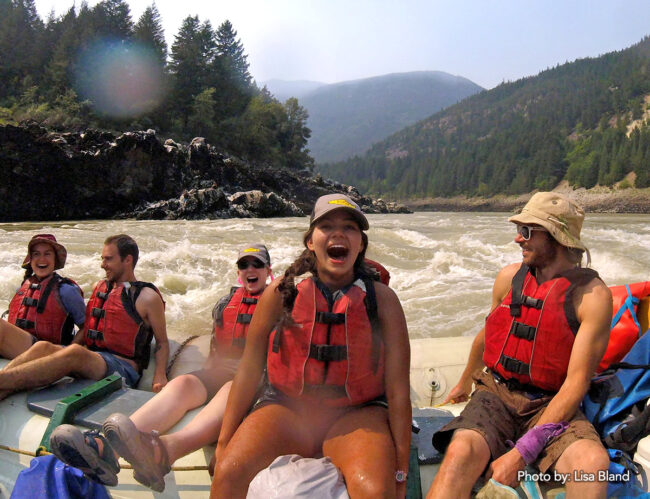 Myka enjoyed the conversations and songs as the group canoed and rafted along the river. Self-discovery was a big part of the journey. “After spending all this time with others, I felt able to be myself,” she explains. “I could think more clearly and enjoyed the process of reflecting, thinking and listening. Knowing that others were going through a similar process helped. I was confronted with who I am, what I do, and where I want to go. It was good to be away from everything else in everyday life. We were all doing so many new things and pushing ourselves out of our comfort zones.”

“The trip showed me that I feel good, happy, content, and peaceful when I am pursuing my passions and that connecting with people doing the same type of work helps fuel me to work hard toward my goals,” she says. “This trip will impact me for the rest of my life because it reignited the spark for my passions and interests and what I want to do with my life.” 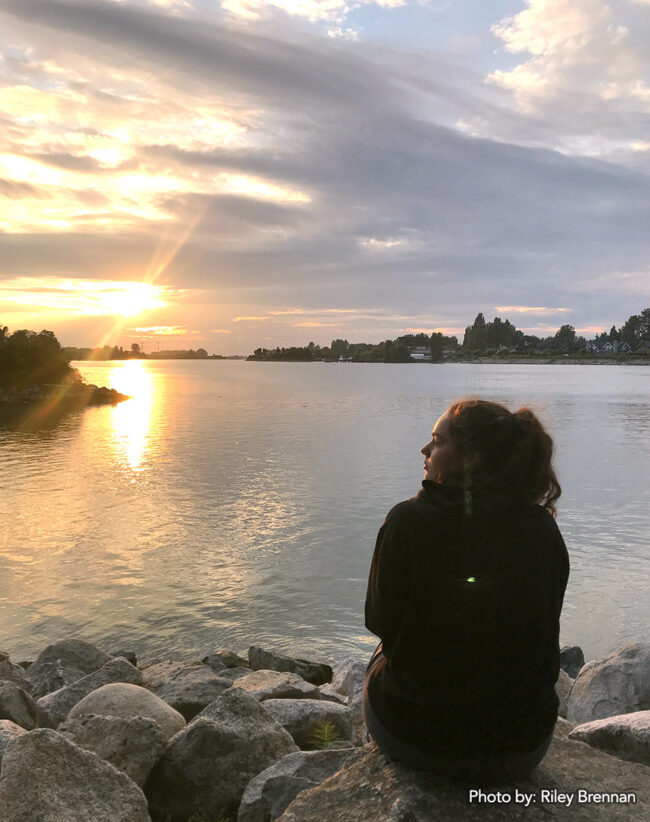 Near the journey’s end in the lower Fraser River at McDonald Beach Park, Richmond.

“The other life-changing thing was experiencing an entity like a river from where it starts to where it ends and goes into the ocean. I’ve always been more of an ocean person and having this connection to the Fraser River is something I’ll always keep with me,” she explains. “Spending a month of my life in a completely different place connected with nature, I felt like I was part of something powerful and beautiful.”

Do you have a Rivershed Story to share? Upload it here.