From the April/May 2017 issue of the Green Gazette

Despite seeming insignificant, cigarette butts are the largest contributor to litter out of all plastic products found along Canada’s shorelines. Four and a half trillion butts are littered every year. The cigarette filters are non-biodegradable, causing them to clog urban spaces and eventually pollute our earth’s aquatic systems. The Cigarette Recycling Campaign (CRC) project aims to change how the public thinks about littering a by-product known to be toxic to ourselves and to the environment. 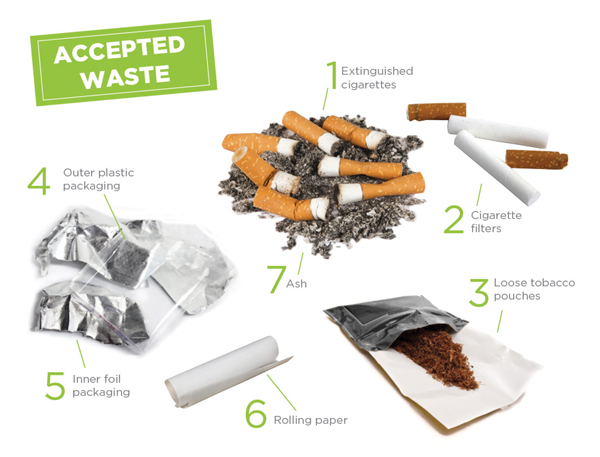 When I began to speak to people in my community about cigarette butt waste, the first thing I encountered was the false belief that filters in cigarettes were made of cotton. People assumed that what they were throwing away could decompose, and were surprised when I explained filters were made from a plastic derivative called cellulose acetate, which takes years to completely break down. Until the butts do decompose, they travel through storm drains and leach chemicals from the cigarette (ie. cadmium, lead, zinc, and arsenic.) into waterways and eventually, the ocean.

I am both an environmentalist and a smoker. The idea came to me when I realized that even though I was passionate about recycling, out of habit I threw my filter on the ground at the end of my smoke, without thinking of where it would go. Why would somebody who would never litter anything else, litter their cigarette butt waste? I wasn’t aware of the environmental impacts until I educated myself, so I decided I needed to reach out to people and give them the facts.

My idea didn’t expand into a project until I travelled down the Fraser River on an expedition called the Sustainable Living Leadership Program (SLLP). This month-long journey on the river guided me in the development of my project and taught me that one person can make a major difference in a community. The CRC has three objectives:
– A research report on the environmental impacts of cigarette butts as well as examples of existing solutions
– Community education and outreach at public events
– Providing community members with containers (pocket ashtrays, butt buckets) for recycling cigarette butt waste 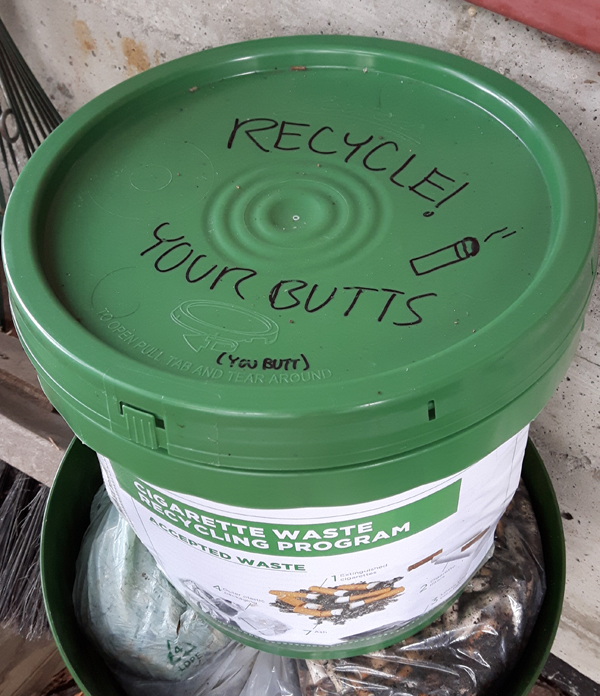 During my initial research, I discovered an organization called TerraCycle that recycles cigarette butts and turns them into re-purposed plastic products. A program called the Cigarette Waste Brigade allows you to easily ship your cigarette butts at no cost. Not only that, but every 3lbs of butts you send in, TerraCycle will donate a dollar to a charity of your choice. The Cigarette Waste Brigade gives the public a way to recycle a toxic by-product.

The response to this project in my community has been overwhelmingly positive. I found a lot of smokers want to dispose of their waste properly, but have limited opportunities to do that in terms of containers or receptacles. The amount of cigarette butt litter where I live will be reduced by providing individuals with education, awareness, and tools to make recycling more convenient.

If you have any questions about the CRC project, please email me at meganrempel@hotmail.com.

Megan grew up in the city of Port Coquitlam but spent many days in the wilderness of BC. She is passionate about creative expression, the outdoors, and sustainable projects. Her goal is to become an Environmental Project Manager of community projects that bring green initiatives to life.

Journey of a Lifetime on the Fraser River: July 20–August 14Lessons Learned from 26 Days Canoeing and Rafting BC’s Fraser River